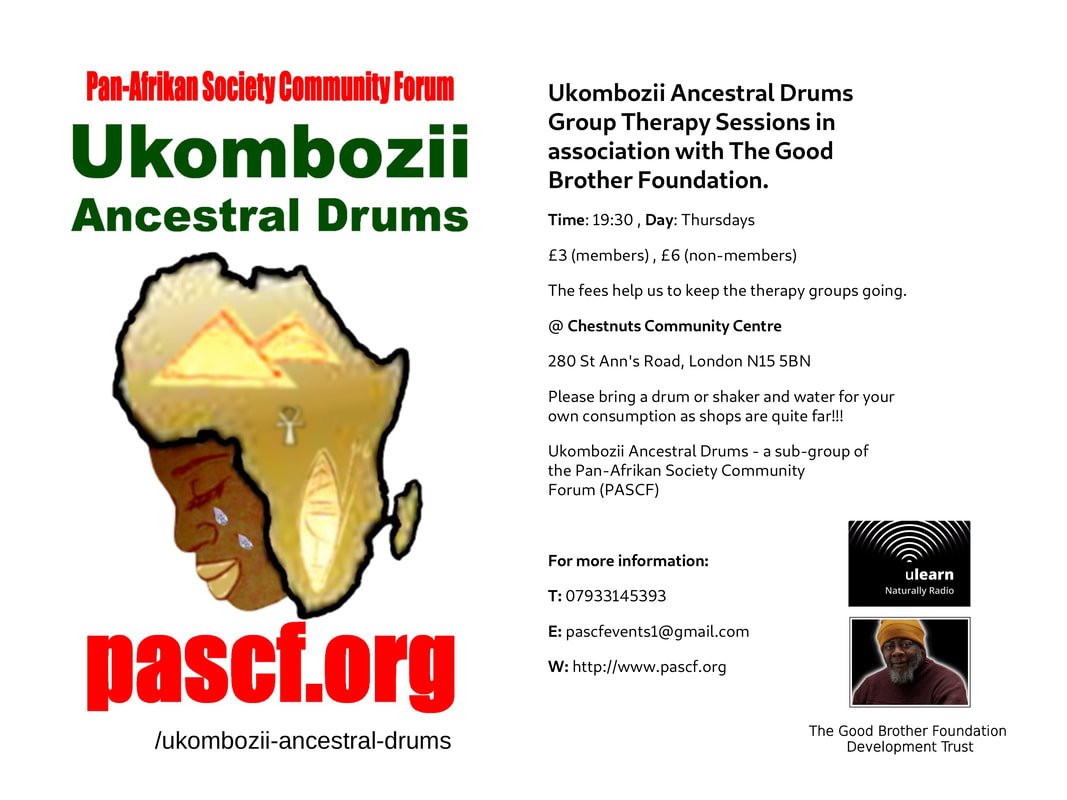 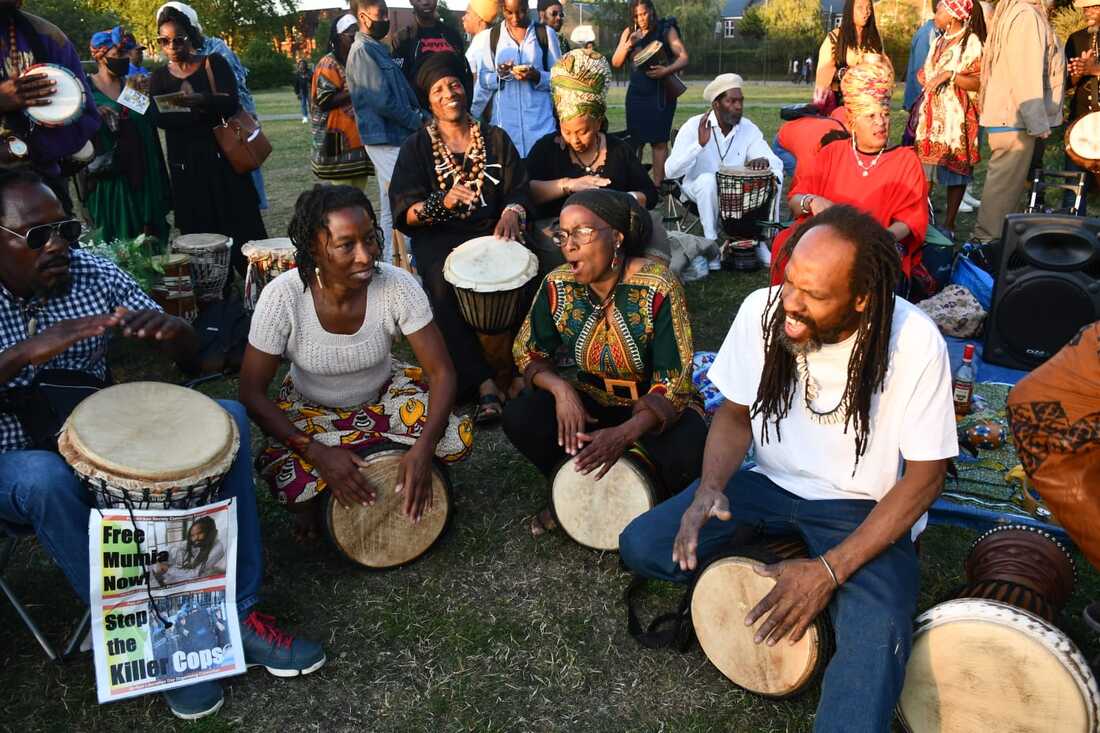 Our good Brother Dougie, our Community Champion was laid to rest on Wednesday 6th May 2020. Due to the current national context there was two key proceedings:


You may view the Online Live Stream 'Celebration of the Life' for our Elder and Community Champion BRO. DOUGIE WILLIAMS above.  The stream featured words from the Williams Family and several key members of the Community. 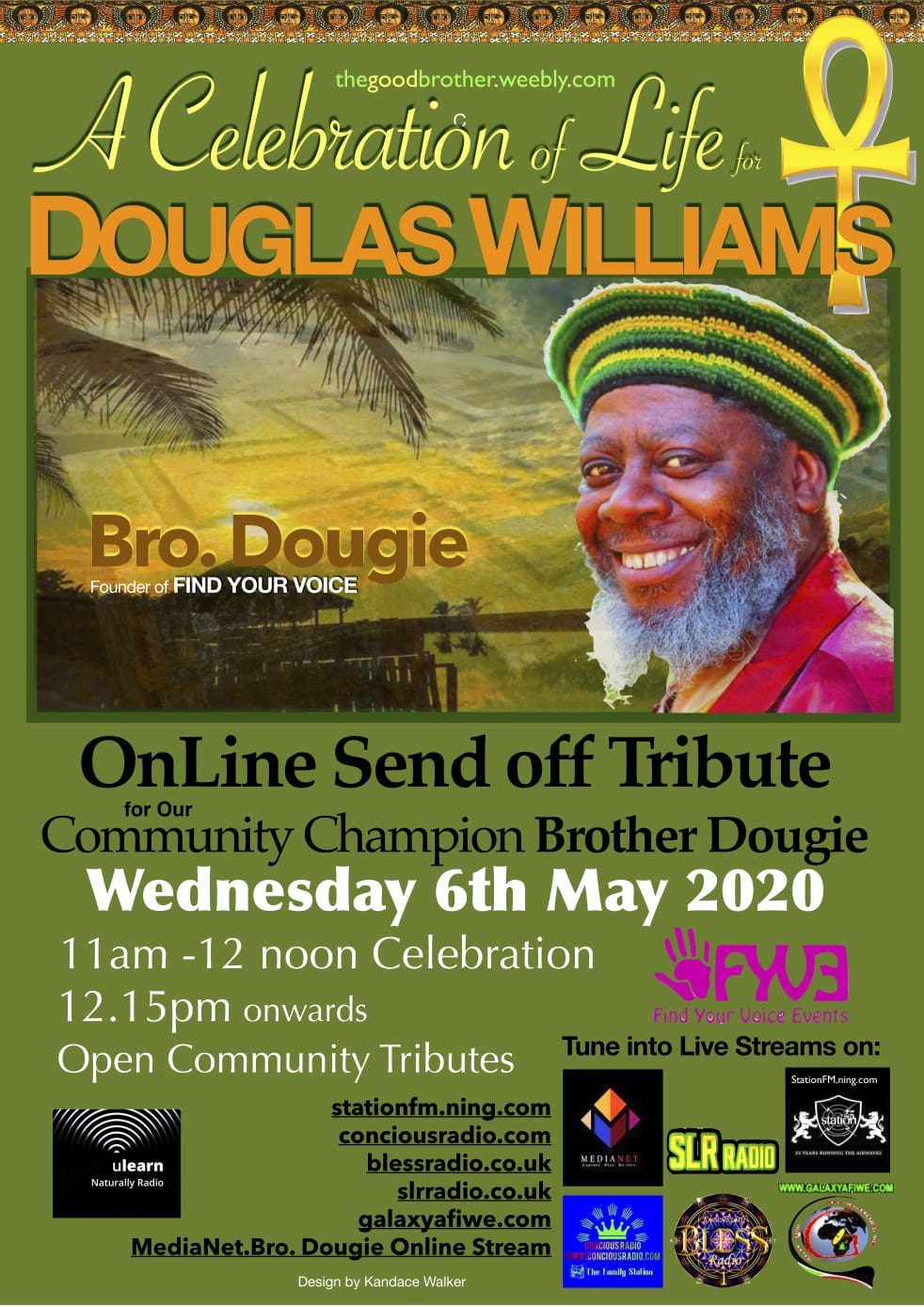 DOUGLAS WILLIAMS, the well-known community radio show host, unapologetic Pan Africanist and black people’s rights activist, as well as an inspirational agitator of black health and wellbeing passed way suddenly in London on Monday, March 30. He was in his early 60s.


Known affectionately as ‘Brother Dougie’, Williams has been described as a mentor and encourager to many who have launched their business enterprises especially in the West Green Road, Seven Sisters areas of Tottenham, north London.
Through his popular radio programme Find Your Voice on SLR radio, he allowed many people to rise and shine and find their voice every Tuesday night at 10.30pm.


Brother Dougie did his last show on Tuesday, March 24 and in it, even touched on the coronavirus crisis gripping the nation, but his death has come as a shock to many radio colleagues and friends who said he was in generally good health up to the time of his passing.

Williams has been involved with north London community work from the 1980s and was much loved for his efforts to bring African Caribbean people together to promote enterprise as well as arts and culture rather than being taken advantage of by the big established entities which took money off the earnings of the community.

He was best known for successfully leading a campaign to stop gaming and betting firms like Paddy Power, William Hill and Ladbrokes from setting up shops in the Seven Sisters and West Green Road area.

He had raised a groundswell of support from the community and was backed by the council to block a betting chain from taking over premises where the iconic Body Music Records had been located for over 40 years.

The government commission had overruled the council, allowing Paddy Power to place a branch there but the campaign against, led by Brother Dougie and backed by MP David Lammy and other councillors, was won in the High Court.

The campaign was fought on the grounds that too many betting shops were being deliberately placed in black areas like Tottenham.

This was just some of the campaign work which Williams had undertaken over the years.

He said: “Brother Dougie was more than an activist, he was a freedom fighter.  He was someone who worked and fought for the unity and liberation of all African people.

“He was a great advocate of African history – knowing our history and culture as a people. He supported many organisations in our community, including the Alkebu-Lan Movement when we first started.

“I had known Brother Dougie for over 40 years as a fellow activist which started with the Broadwater Farm campaign after the police killing of Cynthia Jarrett and the uprisings that took place from it.

“He was one of the people that joined the Broadwater Farm Action Committee and worked vigorously to help to support the people of Broadwater Farm and to push the establishment to ascertain the truth about the death of Ms Jarrett.

“We were also involved in the Brixton Defence Campaign after the uprisings in 1985 following the shooting of Cherry Groce.

“These were some of the many campaigns Brother Dougie and I worked on together and I certainly remember him as an activist who had engaged himself in seeking justice for the African and Caribbean people who have suffered injustice at the hands of the state.”

Mdandaka said activism ran through Brother Dougie’s blood as he was a seasoned and well-blooded campaigner who stood the test of time.

He added: “I sure Brother Dougie would credit his initiation into activism from the many years he spent at the Head Start Sunday meetings at 25 West Green Road where the Pan African Congress Movements were held upstairs the Head Start Book Shop.

“At these Sunday meetings we used to hear a variety of well-informed erudite speakers who covered black history, black culture and current affairs.

“People like Tony Martin who was an expert on the life of Marcus Mosiah Garvey, and Leonard Jeffries and his wife Rosalind were some of the most powerful names in global Pan Africanism who were featured at Head Start.

“These meetings used to teach us how to take the message to the streets and host meetings at town halls supporting groups like the Hackney Black People Association, making people aware about issues affecting them.

“As young men we would also gather at each other houses and ‘reason’ into the wee hours of the mornings about conscious things which widened our knowledge. We weren’t drinking or smoking, just reasoning and using books to verify facts.

“Brother Dougie was well into that, he loved his knowledge, he loved receiving it, sharing it and just loved his people and committed to their liberation.

“He transformed this passion into his radio programme where he invited a variety of speakers covering many areas, including health and wellbeing, because he was also a true believer that a level of awareness would empower people to take control of matters to do with their own health.

“He became very concerned about certain illness and diseases which were affecting our people and the community and he wanted to raise people’s consciousness about health practices from a naturalist point of view that could help to avert many of the conditions affecting black people disproportionately. This was a very valuable contribution.

“In addition to this he was a very nice person, very amiable, very personable,” Mdandaka concluded.

“Brother Dougie was a great community man, he used his radio programme to organise and galvanise the community”
James Beckles

Other SLR radio colleagues who paid tribute to Williams included James ‘Buzzin Bee’ Beckles who also did events with Brother Dougie and worked alongside him on the Paddy Power campaign
.
He said: “Brother Dougie was a great community man, he used his radio programme to organise and galvanise the community and he was giving people a voice.

“He not only wanted to inform and educate, he wanted to inspire people. Before I had my show, he would invite me on to his programme all because he was interested in what I had to say and he wanted to share it with listeners.

“We would be having a normal conversation and he would say, ‘James I want you to come on the radio and share that.’ He was all about elevating people.”

She said: “The contribution made by Brother Dougie is noted and appreciated and as a community we aim to continue the good work he started around health and wellbeing, community cohesion and what he really wanted to promote was love for the community.

“It was very important to him that people came together collectively to focus on issue like parenting, health, arts, culture and working with the elders.

“He was very diverse, but it was all about the people for him.”